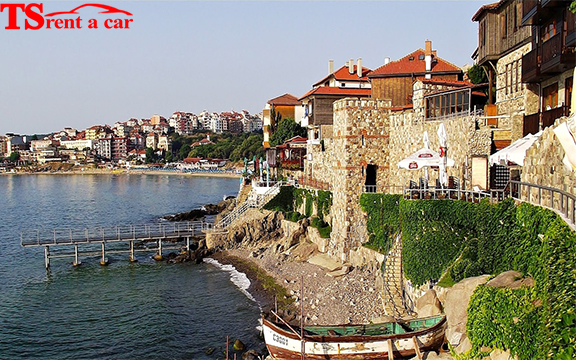 Welcome to Sozopol! Sozopol is one of the most attractive and unique tourist destinations on the Bulgarian Black Sea coast! The city, which has preserved its thousands years of history, is a modern tourist village, attracting all tourists with unusual location and beautiful natural view. This is the first stop for everyone who wanted to get to know the southern part of the Bulgarian Sea! Sozopol covers an area of 526.96 sq km. and is the main engine of cultural life in the area. The area is characterized by a variety of terrain, which goes from plain to hills and mountains. Here you will see a combination of sea terraces, cozy bays, alternating with beach strips. The folds of the coastline create a peninsula with many islands and rock formations, under water, and above the water. Thanks to the highly dissected terrain, the landscape is extremely diverse and beautiful. Beaches stretch along the bays, protected by law. Their attractive strength lies in the combination of rocks and sand dunes. They are accessible, covered with fine sand. Summer here is hot, dry, and rarely stuffy. Winter is not frosty! The average temperature in July is 27 degrees. The sun glows up to 2200 hours a year! The season officially opens on June 15! All this creates conditions for heliotherapy from March to October! The city offers not only a unique contact with millennial layers of cultures of different eras, but also all the conveniences of modern life. New hotels have been built and built in the city, offering a combination of luxury and tradition. There are currently 32,000 accommodations available. Increase the number of family hotels, villas and country villages, as well as hotels of four and five stars. And restaurants in the Old Town, along the southern alley will show you not only the atmosphere of Bulgaria, but also allow you to taste traditional dishes and wines. No wonder they say that the one who has ever been here – necessarily returns again! The coast of Sozopol has its own specificity, giving it exotic and attractiveness! The network of ports and marinas connects the city with the sea and offers an opportunity for entertaining walks. Car hire in Sozopol from TS rent a car Bulgaria will help you to see all the sights of the city of Sozopol.
Sozopol is the most important cultural city of the Black Sea coast of UNESCO, located in 43 kilometres south of Burgas Airport and from the Bulgarian capital Sofia in 427 kilometres. The city has a population of more than 4000 people. Every year the city is visited by numerous tourists who arrive by plane, and naturally here they do not have their own car. With a car to move around is much more convenient than on buses and minibuses. And in this matter you will be helped by the company TS rent a car Bulgaria, which has not only reliable cars to rent in Sozopol, Bulgaria, but also provide an excellent service. In a rented car from our company TS rent a car Bulgaria you can get to any destination in Bulgaria. In the city of Sozopol and its surrounding areas are different assets of cultural, historical and natural nature, but the preferred and most convenient means of transportation is considered to be a car. Without hesitation, cheap rent a car from our company TS rent a car Bulgaria, and we will help you.
Sozopol is an ancient, seaside resort town that is attractive to visitors with sandy beaches, ancient and picturesque houses, 19th century wooden and stone structures. You will want to come back here again and again. There are two beaches in the city: the old beach – Central and the new – Harmanite. The resort is popular due to its quiet and peaceful surroundings. On the shore of the sea grows vegetation, characteristic of the Mediterranean. To the north of Sozopol is the resort of Santa Marina, and to the south – dunes, where you can have fun with water. Every year in September, the city celebrates the festival
of contemporary arts, called “Appoloria” With a rented car from TS cheap rent a car Sozopol you can plunge into the historic part of the city. Sozopol is famous for its Renaissance churches and museums. The city has many churches and chapels, but medieval churches were destroyed in the 15th and 18th centuries by the Ottoman Empire. The Church of St. George, built in 1828, the Church of St. Sosima, the Church of the Holy Virgin, the Church of Saints Cyril and Methodius are a success for the city’s guests. Cheap car hire in Sozopol, Bulgaria, allows you to easily and comfortably get to other attractions: the Art Gallery Dimitra Laskaridisu, the House-Museum of Alexander Mutafov (First Minister of Bulgaria), the House of Grandma Kukulisa Khazhinikolova and other buildings of the 18th-19th centuries. A great place for the tour can be noted Ravadinovo Castle, located near Sozopol and received a celebrity after the construction of it Georgi Tumpalov – sportsman and policeman. Tumpalov was both the owner and the architect-builder, although the castle is not yet completed, but those who want to see it has opened doors. Around the building is a park with gazebos and a swan pond. Once the construction is completed, it is planned to open a high-class tourist complex.
The rental car opens up a lot of opportunities for you and thanks to TS rent a car Bulgaria, Sozopol you can visit the Ropotamo Reserve, which is located twenty kilometres from the city of Sozopol. Since 1992, the park has received the status of a protected zone of the strict regime, there live about 250 birds, 100 plants, a significant part of which is listed in the Red Book. In Ropotamo you can have a great time, walk in the park, ride a small or large boat, you can also relax in the cafe near the wharf.

Camping Kavacite, located near the town of Sozopol, is a great place to stay. Here, tourists put up tents or trailers and enjoy nature. Cavacite can accommodate about twenty tents and fifty trailers, as the camping area allows it to do so, to the beach a distance of fifty meters. Camping Cavacite allows you to relax, relaxing and enjoying the beauty of nature. On Cavacita it is worth to come by rented car to those who prefer romance, quiet and quiet rest.
If you need a cheap car hire in Sozopol, then you should contact the car rental company in Sozopol TS rent a car Bulgaria. We provide the best prices and quality level of service.