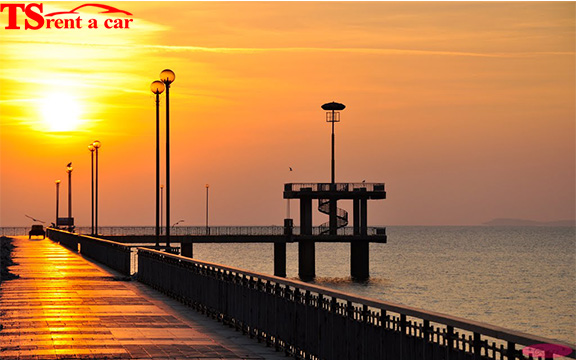 Burgas is one of the biggest Bulgarian towns. The city is located in the southern part of the Bulgarian Black Sea coast and is known for its tourist attractions. In Burgas has many small and picturesque resorts of Sozopol, Nessebar, Pomorie, Lozenets, Ahtopol, Chernomorets, and many others. Burgas is the largest industrial centre and transportation hub – city still serves as the starting point for tourists in southern Bulgaria. The city and its beautiful resort towns beyond, offers a rich nightlife, endless clean beaches, lots of sunshine, warm sea and many positive emotions. The town itself offers its guests a good weather in the marine park on the beach in beautiful restaurants and clubs, as well as many cultural events and festivals. The city has many museums and galleries where they take place of interesting exhibitions constantly. With so many interesting places to visit without a car, it will be difficult, so in Burgas is available in many places, car rental service. You can easily hire any car rental for a day or two for your entire stay in the city. To rent a car  in Burgas does not cost much, it is cheaper than a conventional taxi service. You can book cheap car rental in Burgas from comapny TS car hire Bulgaria by calling the company before arriving in Bourgas, if you do not have enough time to do everything in advance, you can rent a car at the airport in Burgas, immediately after the landing of your plane and get to your hotel or apartment.

The climate in Burgas and the region is humid subtropical and continental with Black Sea influence and steady rainfall during the four seasons. Summer and autumn are the Mediterranean – long and lean. The daily average temperature in summer is 26 ° C and water temperature – 24 ° C and maximum daily temperatures above 20 ° C are until November. Sunny days in the summer are up 27 per month with about 10-11 hours of sunshine a day. [5]

Due to the influence of the sea, autumn is long and warmer than inside the country, and the spring is cold and comes one month later. Winters are much softer than inside the country and almost without snow. The average winter temperature is 4 ° C. The average annual temperature is 13-14 ° C.
But rental cars are equipped with everything needed for any driving situation and weather that will make your stay even more enjoyable as you will not be worried about your trip across the country.
transport
Bourgas is served by regular bus routes and additional three transport companies, the dominant role of the municipal company “Burgasbus” LTD.
Transport in the city of Burgas and the adjacent neighborhoods served by eighteen bus and a trolley line.
“Burgasbus” Ltd. – serving buses № 4, 8, 9V, 12, 12A, 13, 15, 121, 211, T1 (209);
“Burgasvolan – 95” Ltd. – № № 7, 9A, 17, 25, 101 and Bulgarovo – ZhPGara (internal);
“Comfort” Ltd. – № № 1, 2, 2A
hotels
Primoretz Grand Hotel – 5 stars
Bulgaria Hotel Burgas Hotel Mirage Hotel – 4 stars
Aqua Hotel Central Hotel Cosmos Hotel Palma Hotel Luxor Hotel – 3 stars
Interesting places
Burgas Burgas Mineral Baths Lakes Historical

Burgas is the largest resort city in the southeastern part of the country and is the transport and administrative center of Bulgaria. If you go to Burgas with your children, it is better to prefer this city than another – more quiet for family holidays, closer to the south or north of Burgas. Therefore, having reached Burgas, rent a car in Burgas from the company TS car hire Burgas Bulgaria for a comfortable trip to the cities and resorts far from the bustle. Burgas is one of the largest Bulgarian cities on the Black Sea coast. The city is located in the southern part of the Bulgarian coast and is known for its attractions. In the area of Burgas there are many small and picturesque resorts like Sozopol, Nesebr, Pomorie, Losenets, Achtopol, Black Sea and many others. Burgas is an industrial center and a major transport hub – the city still serves as a tourist destination for southern Bulgaria. The city, and its beautiful resort villages beyond, offer a rich resort life, endless clean beaches, plenty of sun, warm sea and lots of positive experiences. The city itself provides its guests with a pleasant time in the seaside park, on the beach, in beautiful restaurants and clubs, as well as a variety of cultural events and festivals. The city has many different museums and galleries, which constantly host interesting exhibitions. It is worth noting that the city is interesting for its historical and cultural attractions, so to visit its heritage, of course, makes sense. The city is well developed public transport and shuttle taxis, but it is more convenient to move with a rented car from TS car rental Burgas, because you will no longer be tied to the rigid schedule of time and routes, and unscrupulous taxi drivers will not be able to intentionally oversize the prices of their services. Thus, renting a car by the company TS car hire Bulgaria, you can not only move quickly around the city, but also save time and money.

The best walking place is considered to be the Marine Park, located high above the sea. Here you can find various historical monuments and sculptures.

The beaches of Burgas are famous for their therapeutic effect, as the sands have a dark color and include magnetite impurities. Also, not far from the city, there are mineral healing springs “Aqua Kalide” called mineral baths, known as the ancient Romans. Today, thermal waters treat many diseases, such as gastritis, kidney disease, musculoskeletal and nervous system.

The resort was completely destroyed during the war in 1206, but four centuries later the Turkish sultan built a bathhouse, which is very popular today. Archaeologists are still working here, thanks to which many objects reflecting the era of that time were found. And about the past of the city you will be told in the City Historical Museum, where a wide range of items of those times: ceramic utensils, coins, decorations, stone tombstones, knives and weapons. And the Ethnographic Museum has an amazing collection of traditional kuker masks, national costumes, everyday objects and ceremonial attributes. In 2013, they found a medallion of silver from the 11th century, which depicts St. George, a gold earring from the days of Ottoman rule, which is decorated with pearls, mace in bronze. From the historical places it is worth visiting the District Historical Museum, getting a rented car, which is located several exhibition halls. Here you can see the historical exhibition, telling about the history of Burgas his photographs, various documents, and the museum is represented by church attributes, literature, works of art from all over Europe.

But visiting these places is not so easy if you do not have a personal transport. In solving this problem is always ready to help the company TS cheap car hire in Burgas which for more than 10 years successfully provides car rental services not only in this city, but throughout the country. Over the years, we have accumulated considerable experience in the proper conduct of the car rental business in Bulgaria, and we know exactly what our customers need. By the way, this is confirmed by numerous positive reviews about cheap car rental in Burgas from happy people, using our rental services. The secret of our successful work is simple – we care about safety, comfort, price and speed of delivery of cars for hire. Each of our rental cars is available for rent without a mileage limit. Also, regardless of how the car was booked and rented in our company TS rent a car Bourgas, free delivery of the rental car to the customer-named time and place, which greatly increases the comfort from the use of our cheap car rental service in Burgas. Also, without exception, all rental cars regularly undergo technical inspections for faults, which ensures the complete safety of you and your loved ones. You can be sure that the rental car will not let you down in the long road. Moreover, all these services we provide at the lowest prices in the field of car rental in Burgas, and in all Bulgaria, and the registration of an application for car reservation for hire takes a few minutes of your time and perhaps even without a physical visit to our office, because we appreciate every second of your vacation and believe that to rent a car in Burgas, against the background of the development of the Internet and mobile communication, remotely possible!
The sights of the city of Burgas can be attributed not only to museums, monuments, sculptures, because the city is also valued for its lakes, which have a therapeutic effect because of the special mud, which is widely used in cosmetology. These include: Atanasovskaya, Burgas, Mandren lake-lagoon.In addition to modern architectural structures, Burgas is famous for the presence of buildings that have been preserved since the 19th century. Prominent figures of culture and art of Bulgaria were born in the city. Burgas evenings and beautiful sea are dedicated to a huge number of songs.
Thanks to the Black Sea coast and the beautiful climate in the summer, a huge number of not only Bulgarians, but also visiting tourists are resting in the summer. The most convenient means of transportation and visiting the city’s heritage is TS rent a car Burgas. In the centre of Burgas there are many offices, buildings, shopping markets and entertainment centers. Residents and visitors of the city like to walk on two pedestrian streets in the center of the city. There are numerous shops, restaurants and cafes. Don’t forget to visit the old bridge, which is located on two floors, from the second floor of which you can enjoy the view of the sea.
Fans of architectural monuments may be surprised by the remains of the ancient settlement of Rusokastro and Deultuma, and can visit the island of St. Anastasia, which boasts an Orthodox temple, lighthouse, hotel and restaurant. You can also visit the Church of Saints Cyril and Methodius and a small Armenian church in Burgas. Both buildings date back to the 19th century. There is also an amazing ornithological reserve in Burgas. Due to the location of the resort city – in the deepest western part of the Bay of Burgas, around it formed three lakes-lagoons: Atanasovskoye, Burgas and Madrensk. The shores of these lakes are a favorite place of birds: pelicans, ibis, herons and many other migratory feathered friends.

Renting a cheap rental car Burgas from our company TS car hire Burgas, you can have fun and usefully spend time, whether it’s a vacation, a business meeting or any other goals – we are always happy to help you! With such a variety of difficult to consider and visit without a car, so the city offers car rental services in Burgas. It is easy to contact our car rental company TS car hire in Burgas and order a car for rent for any period of time. Car rental services in Burgas are not expensive and are much cheaper than the services of a conventional taxi.
Order a car for hire in Burgas from TS rent a car Bulgaria, you can pre-order on one of the phones listed on the website of our company. We recommend to do this operation in advance, in order to provide better service, but if you did not have time to do everything in advance, you can rent a car at the airport of Burgas immediately after landing your plane and from there comfortably reach your hotel or apartment, wherever it is. Choose a car rental company in Burgas for your vacation, TS rent a car Burgas and you will be very happy, because we work only for you!