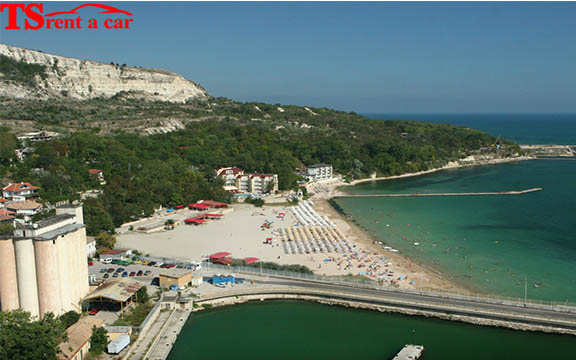 Balchik is a small resort town located on the white coastal slopes. It`s a wonderful holiday resort. It has warm sea, fresh air, an almost Mediterranean landscape and many places for entertainment. There is also a beautiful and majestic Palace, which is located on the very seashore and in which the Romanian Queen Maria once lived. The town is ancient, full of legends and myths. It is located 40 kilometers from the city of Varna. If you are planning to spend your vacation in Balchik and you need a car, then the TS car rental Balchik will help you choose a suitable model and arrange its rental for a specified period. Having the opportunity to use a car rental in Balchik, your vacation will be much more comfortable and pleasant. Balchik has museums, galleries, souvenir shops, restaurants, cafes and attractions. Balchik is interesting not only for its internal architecture and resort life, but also outside its borders. Near Balchik there are many spacious beaches, small resort towns that you can always visit using a car rental. By the way, a car rental can be ordered before your arrival in Bulgaria by going to the TS car rental Balchik website, or upon arrival at Varna Airport. You can book a cheap car rental from TS car rental Balchik, which will deliver your rental car on the day of your arrival in Varna. The company offers very favorable prices for car rental in Balchik, which include: auto insurance, “Vinetka” / admission fee for travel on the highways of Bulgaria /, unlimited mileage, 24/7 emergency car assistance, as well as CDW and TP. Renting a car from TS rent a car in Balchik is easy and profitable. If you often come to Bulgaria, then you can use the club card as a regular customer, which provides discounts on car rental, favorable prices and other types of benefits. It is always easy to contact your local representative of TS rent a car Varna. Thus, you will have a car for rent and many opportunities to organize a wide variety of independent excursions around the Bulgarian Black Sea coast, which will make your vacation in Balchik enjoyable and interesting.
One of the main attractions of the Balchik resort is small houses with tiled roofs, cobbled streets, the cleanest sea. This is what probably impressed Maria, the Queen of Romania that is why a summer dwelling was built in 1930, which has the name “Quiet Nest”. The palace consists of three floors, the gardens and parks contain about 3000 plants, 250 species of cactus and aloe. According to the style of the building, one can judge the religious preferences of Queen Mary, it shows the convergence of Christians and Muslims. One of the most beautiful gardens can be noted the Garden of Allah, the Silver Well, alleys, water lilies made of clay, which were brought from Morocco. The queen died tragically while attending a duel of her sons, receiving a fatal bullet wound.
There are 4 museums in the city; the dominant place among them belongs to the Historical Museum, which is located in the city center. Here you can find original items from the Bronze Age. The Ethnographic Museum is located in the merchant house of Balchik and is considered a cultural and historical heritage of the country. The museum will tell about the material culture of the inhabitants of past years, handicraft and decorative-applied masterpieces. Municipal Art Gallery presents popular works of contemporary Bulgarian and foreign artists are presented in the Municipal Art Gallery. Exhibitions of famous masters are held here. Balchik is located among the white hills in the bay, which protects the Cape Kaliakra, here you can find the ruins of a medieval cave. Here Lysimachus, a descendant of Alexander the Great, could hide his savings and jewelry. Near the gates of Kaliakra there was a fortress of ancient times. During the Turkish offensive in the 14th century, all but forty girls were killed. But they also threw themselves into the sea, before that they braided their hair together and joined hands so as not to be captured. Near Balchik there is the village of Obrochishte, here a fortress has been preserved since the reign of the Ottoman Empire.
Moderate continental mild climate allows sunbathing from May to September.
The city’s beaches are state-owned and therefore have unlimited admission, although there is a charge for sun loungers and beach accessories. In addition to the beaches of the city, there are also mineral baths, healing mud, which have a healing effect.
With a rented car you can reach Balchik Tuzla – this is a lake-lagoon, which was formed due to landslides, and is popular for healing mud. Nearby there is a balneological center, which treats diseases of the joints and the musculoskeletal system. Also, the area has a mineral spring with a 31-degree water temperature.

Tourists can stay in hotels, boarding houses, built near the coast. There are also many markets, restaurants, a grocery market and a fish market. Fans of evening entertainment can have a great rest at discos, visit cafes, bars, restaurants in which the cuisine of Europe and Bulgaria is present…
Souvenirs and clothing are sold in trade stalls.
Tourists are happy to buy ceramic dishes. At every corner, you can buy a basket of any shape or size, as well as wooden kitchen utensils. The most delicious drink of Bulgarians is the wine of its own production from Cabernet, Chardonnay, Merlot.
The nearest airport is located in Varna, so you can get to Balchik from the airport by taxi. And the Sofia-Balchik route is tiresome with its 6-7 hour trip. Therefore, the most profitable and affordable transportation option is considered to be renting a car in Balchik from our company TS rent a car Varna.